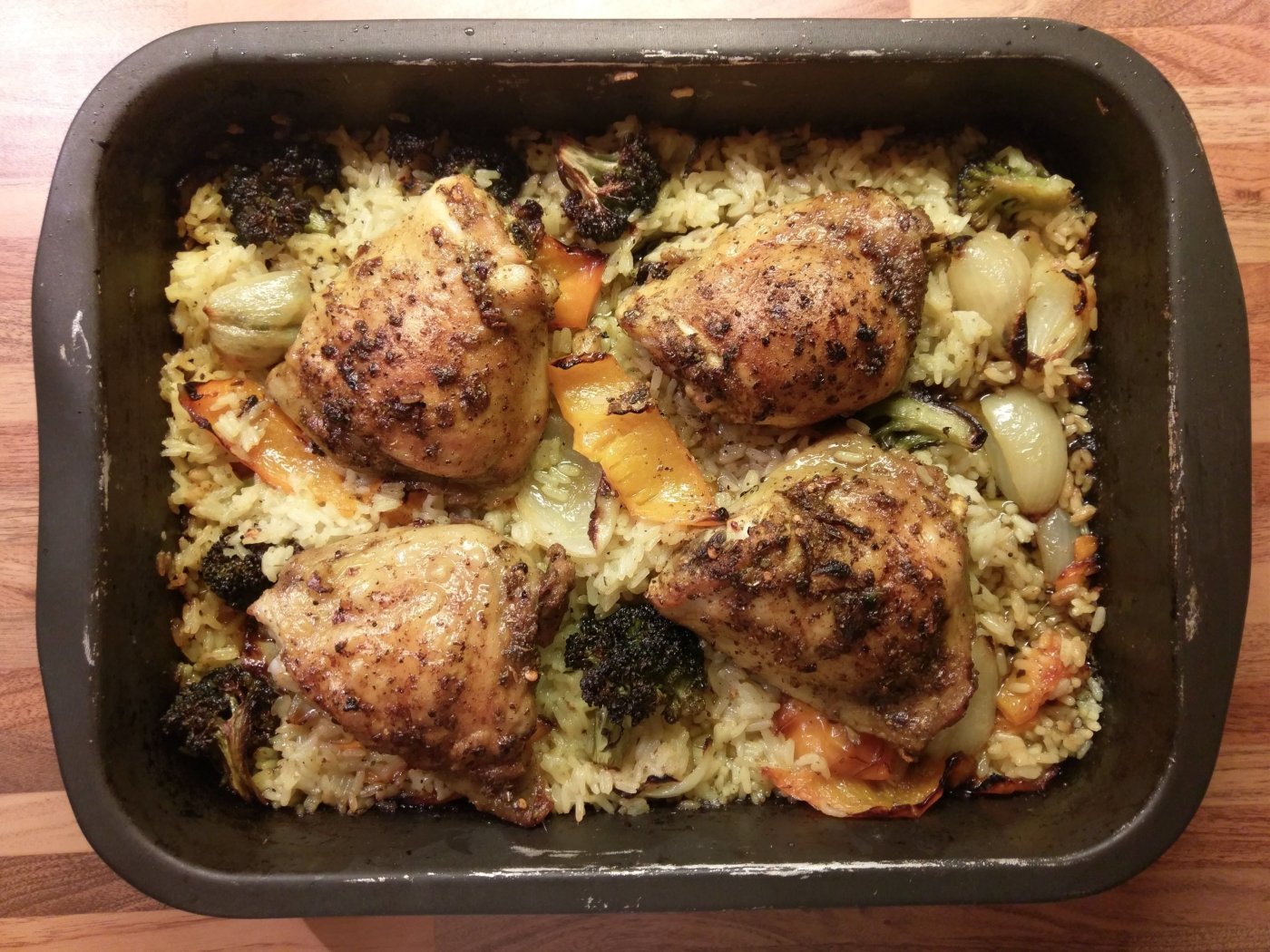 On my way back from town on Saturday I head into the massive cavernous Tesco with no idea what I want for dinner. A little dulled by hangover, I wander listlessly up and down aisles, looking for an ingredient that sparks something off.

The limit of my imagination is rice. It would be good to eat some rice. I also don’t want to make much of an effort. The best compromise between these two positions is chicken thighs with rice and some other stuff.

A chicken thigh is an excellent host. It invites in herbs, oil and spices, greets them warmly and listens politely to their interminable stories about how their neighbours take too long to take the bins back in. You can also get four of them for about two quid. I pick them up, plus some broccoli and an orange pepper, the latter because I don’t think I’ve used them before and I think green and orange will look quite good in the roasting tin. I quite often make cooking decisions based on how the vegetable colours will complement each other. Possibly there is a connection between colour and flavour of which some Swedish food scientist is midway through a decade of research, later to be widely discredited by his peers because he’s spent most of it just eating Chomps.

The thighs will need a coating. If I were better at thinking about these things in advance I would’ve bought and done all this before heading out for the afternoon so they could marinate properly, but a quick improvised one will have to do. This is always a question of gazing at the spices shelf trying to work out what will go with what, usually a matter of elimination more than anything else. I don’t want it to taste curryish so cumin is out, and I think paprika is going to overpower the rice when I want the whole thing a bit more delicate.

I settle on celery salt, not particularly knowing what celery salt is but noting that I’ve got some; chilli flakes; pepper; sage and turmeric. I crush this up in a mortar with some garlic cloves and make a paste with olive oil. 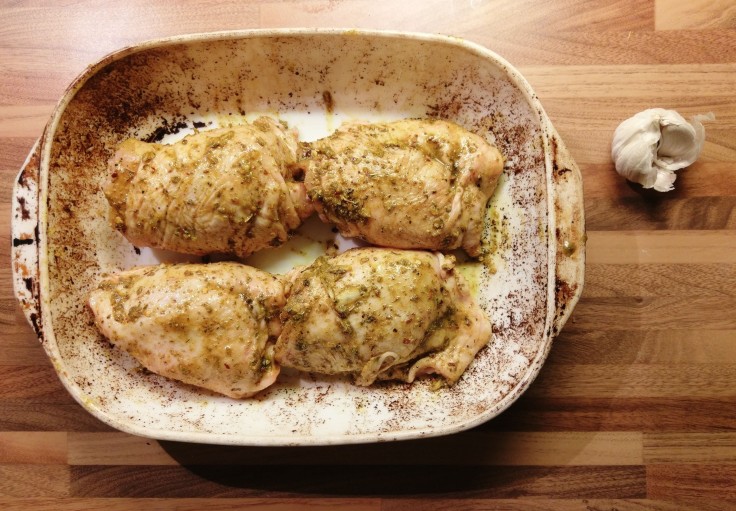 Covering the thighs with this stuff always leaves one of them a bit sparsely coated because I’ve misjudged how much to put on each one. And because I’ve put turmeric in it, it leaves me with the old Mumbai manicure: yellow fingernails for a couple of days afterwards.

They’ll need a bit of time in the oven on their own to think about what they’ve done before the vegetables come to join them, long enough that some of the chicken fat has seeped out and they’ll have something to coat themselves in. I enjoy one of my most successful ever pepper deseedings – chop, twist, unplug, leaving only one rogue seed to tap out – then chop the broccoli and quarter an onion, pulling its layers apart.

It’s obvious that the roasting dish I’ve used is going to be too small to house all the veg, chicken and rice, so I transfer everything to the black metal one, baste the thighs a bit and put it back in the oven with the little bit of extra oil it all needs to sort itself out while I get the rice going on the hob with a chicken stock cube. 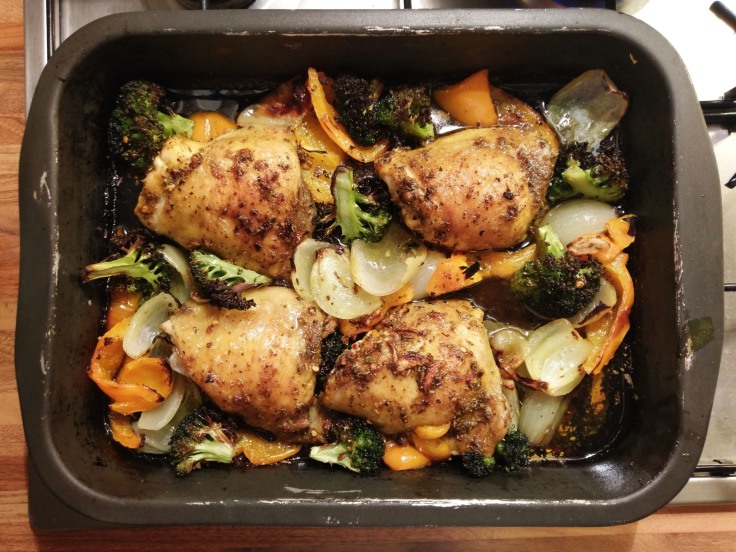 I am terrible at measuring accurately how much rice I’m going to need, usually ending up with far too much that I then don’t know what to do with but refuse to throw away. This time I judge the amount just about right but I’ve messed up the timings: it’s going to need at least ten minutes in the roaster with everything else if it’s going to be anything more than a spectator to the baking, the stuff in the oven’s close to done and the rice is still a while off. This is all incredibly dramatic and narratively well-suited to a reboot of the Speed franchise. So I take the tin out and let it sit there for a bit. Admittedly they might have to punch this up a bit before Keanu Reeves agrees to sign up.

The rice done, I take the thighs out, mix the stocky grains in with the orange and green and place the chicken back on top of everything for ten final minutes in the oven.

In the end it’s pretty much fine but the thigh marinade needed salt in it. It turns out celery salt isn’t especially salty. They’ll be hearing from my lawyers in the morning. 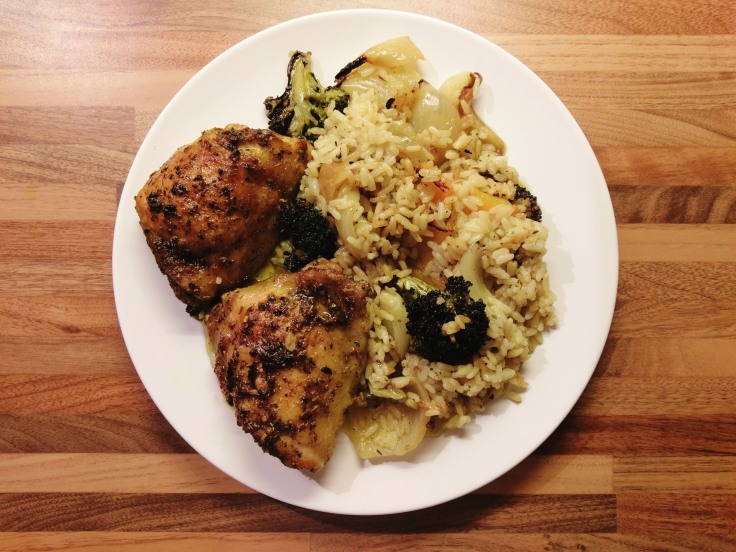