It’s a Monday. I’ve been at work, I’m walking home through the snow and whatever creative spark I ever have when it comes to cooking is pretty much extinguished by this point. I cooked proper stuff at the weekend, leave me alone.

Sausages though. The plate comes together in my mind. I mean it’d be fine if it was just sausages, obviously, because they are Man’s Greatest Invention, but I think I’ve got some oven chips in too. If not I’ve definitely got potato waffles, because they were doing them for a quid in Tesco when I was there on Sunday and you’d be mad to pass that up. And eggs. Christ, eggs. My pace quickens. Then it slows again because I eat a lot of sausages and can’t keep up.

This is the sort of meal I’d eat in the eighties, in ripped jeans, while listening to Now 14 and sinking the Belgrano. It was designed to keep me alive, nothing more. Tonight it’s not going to constitute any sort of flavour explosion, but the taste will be bolstered by two of the eighteen sausages I bought last year at a butcher’s on West Smithfield, which are excellent.

You can, of course, cook sausages from frozen, and anyone who tells you otherwise should be no-platformed. It must be done slowly, but then sausages should be cooked slowly in any case, in a pan on the lowest heat setting, given a chance to brown gently. Like it says in the Bible: if you don’t have time to cook a sausage slowly, don’t cook it at all.

I spray a small pan with some Flora 1cal, because I don’t want them to burn but the last thing they’ll need is any more oil, and put the two frozen sausages on at the lowest heat. It’ll take them half an hour or so with a bit of turning, propping one up against the other so it doesn’t roll over onto a side already browned. I do have oven chips but the waffles idea is fixed in my head now, like some crazy potato lattice dream, and three are hurtling unstoppably towards the oven. 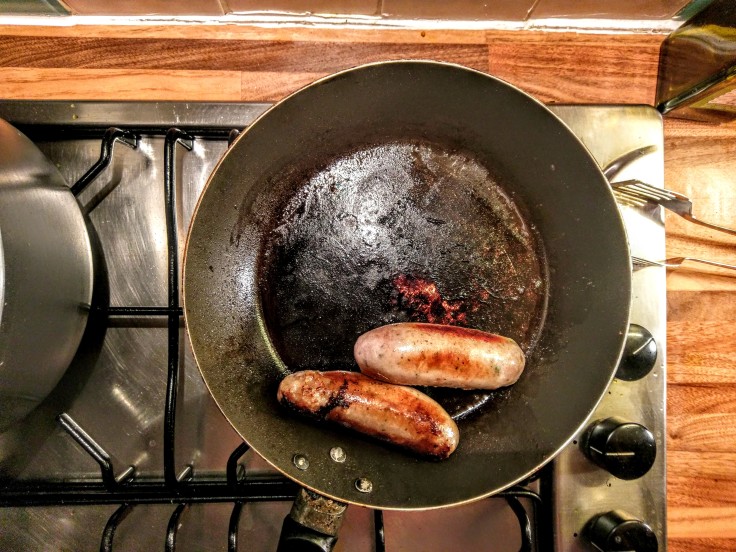 God, this is easy. I do love cooking but the pleasure in getting home and quickly having something simple ready (by which I mean really simple, not Guardian midweek recipe make-your-own-pesto-it-only-takes-ten-minutes simple) is hard to beat. I get a pan of boiling water on and dump in the rest of the bag of frozen peas I’ve got. I’ll poach the eggs in the same water, I decide, because it doesn’t make much difference.

Poaching eggs without a poacher pan is a skill I mastered late last year, after which I pretty much put poached eggs on top of everything for a week, I was that pleased with myself. You don’t crack it straight into the water, where it would just spread its little white tendrils all around the pan like a shit ghost, leaving a little yolk football floating around homeless, as if on a railway siding beyond a school fence. You crack it into a ramekin first so it has a chance to cohere and take its shape, then tip it in right at the water’s surface. The water doesn’t need to be boiling too hard, and after two minutes or so, as long as the white’s all set then so are you. Everything ends up haphazardly on the plate, the peas plugging some of the waffles’ little holes.

I am preoccupied when eating by a few things, which is why, as anyone I have eaten with will tell you, I do it so fucking slowly. One of them is making sure the last forkful is a good one, maybe because a bad last mouthful would spoil the memory. As a child I would achieve this by eating everything in order (like, all the peas, then the waffles and eggs, then the sausages, to end with the best item). These days I want bits of everything on every fork if possible, so it’s a question of subtraction by equal measures as I go: when one of the two sausages is gone, so does one egg and around one and a half waffles need to be. The peas are a wildcard and can take care of themselves.

This means I will have reduced the meal by about half, and don’t need to compensate by eating more or less of any one thing in the second half to get down to the ideal final forkful, in this case a piece of sausage, pierced with a bit of waffle and egg. Admittedly this sounds insane now I’ve written it down.