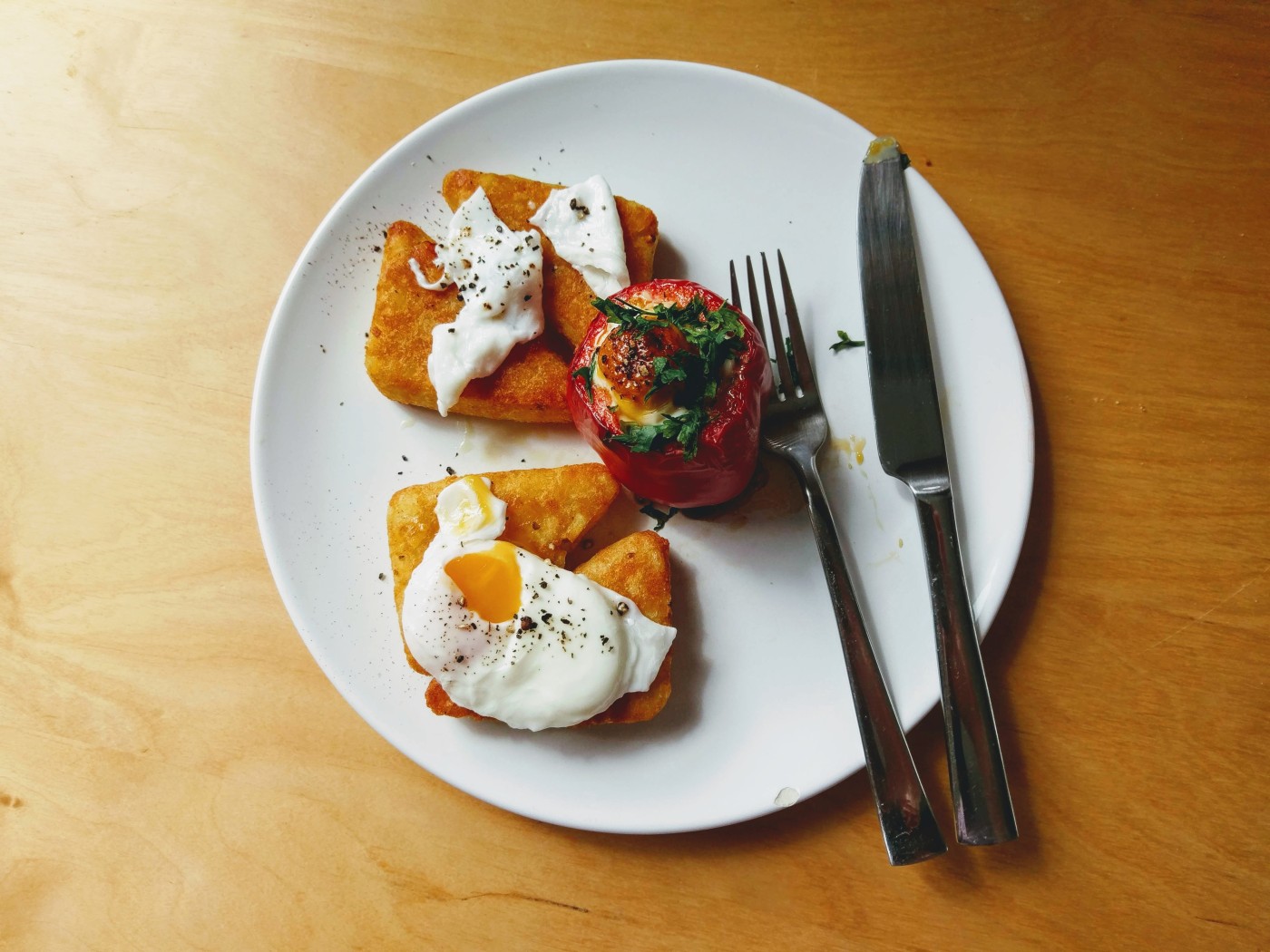 I don’t usually eat breakfast during the week, but at the weekend when I’ve got a bit more time I’ll do something proper. So effectively all the breakfasts I eat are hangover breakfasts to varying degrees. The main ingredients are eggs and regret.

On Friday at about midnight I head into the kebab house on my way home from the shame saloon. They’ve just got a new TV on the wall bracket and it’s got Netflix on it, so the last time I went in (three days ago) the two guys in there were no longer watching Police, Camera, Stop! on ITV4 but working their way through the Critically Acclaimed Films list sequentially. This time, in a twist I didn’t see coming, they are watching a documentary about Germaine Greer on BBC4. I like to imagine that one of them loves police car chases and the other is bang into radical feminism.

I eat about half the kebab and save the rest for lunch. On Saturday morning, that being about seven hours later, I don’t particularly need to be eating any more meat, and besides which I don’t have any bacon in. So I glance in the fridge. There’s a red pepper and some parsley, the latter of which I’m never going to get through before it’s gone all crispy, so I might as well do something with them. I’ve stuffed peppers before with couscous, so I see no reason why I can’t cook an egg in one. The world is my giant red pepper egg cup.

This will need hash browns, as most of my breakfasts do, so I get four of them going in the oven. (Hash browns are one of the few items I have to buy from the Tesco a bit further away, because the McCain’s ones you get everywhere else are awful: never crispy enough, and liable to leave little bits of potato detritus all over the shop. Does an insistence on a hash brown that yields its pieces to the knife without utter collapse signal the vanity of a moneyed liberal elitist out of touch with the concerns of real people? Possibly, but the Tesco ones are a quid a bag.) I deseed the pepper then slice off a bit at its base so it’ll stand up for itself, drop the sliced bits in then crack an egg into it with a bit of oil, which it probably needs. Most things do. I poach another egg for good measure, so the hash browns aren’t found wanting.

The next morning I’m still feeling a strong egg vibe, but I want to mix it up a bit. “Mixing it up” when it comes to eggs means scrambling them if I poached them last time; I don’t hold with fried eggs much, and other than a foray into coddling (bit of a faff for the result it produces) these are my two weapons of choice. I’ve got some oldish tortillas which are a bit dry but will be all right once wetted a bit and heated up.

I once ordered a breakfast burrito at the St George Ferry Terminal on Staten Island and it was an amazing thing: packed with cheese and eggs and chilli and Christ knows what else. I’ve been trying to recreate it ever since, never with much success. I do know this of the breakfast burrito though: easy on the butter there, sport. Too much to scramble the eggs and it’ll be running down your wrist later no matter how well you’ve wrapped it all up.

There’s a green pepper skulking about in the vegetable drawer, so I fry that with a bit of chilli then scramble the eggs in with them, before wrapping it up in a couple of tortillas, using the technique I mastered a few years ago and then spent a week putting everything in a burrito: bit of sour cream over the whole thing, add the mixture in a line just below the centre, as if it were the mouth on a smiley face, then pinch the sides in and roll it all up.

A couple of weeks later, after a bout of illness during which I couldn’t each much other than bananas and dry toast, I’ve got a load of bananas left over so I take to making smoothies in the mornings for a while. One banana, half a glass of milk, two ice cubes and another fruit does the job, sometimes with a bit of spinach to greenify the whole thing. The other fruit is usually an apple, but I have a bash with blueberries, strawberries, pears and a plum at one point.

This banana surplus leads to a quick burst of creativity, during which I make some banana pancakes as another weekend breakfast. These are pretty much just a banana, some flour and some baking powder mashed up in the food processor. Possibly an egg. I’ve got some blueberries from the smoothie spree so I drop them on top after the pancakes are fried and flipped, and drizzle some maple syrup over.

A postscript: this is the last meal I made and ate before I got ill, a Scandinavian beef hash with potatoes and sour cream. It was great, but now I can never eat it again or write a post about it because I mentally associate it with illness and can’t stomach the prospect. I can also never go to Ikea.